All my grandparents were pheasant Farmers near Brittin Dorgan Germany. My father and his cousin, that we called Uncle Grenzig were the first 2 young men that broke away from the Farms and went to the city of Berlin to learn the mason Trade. They were both over 20 years old.

Served their time as apprentices and work in Berlin as Mason Mechanics. Uncle Grenzig came to Brooklyn NY about 1866 and 1870 Father and Family came to Brooklyn June 1870. We first lived with Uncles Family on Broadway near Gerry St. We then moved to a home on Gerry St. near Throop Ave that was about 1871. In 1872 we lived in Varet St north side between Graham Ave and Humboldt St. Here both of my parents were in the summer taken down with Small Pox they were not taken to the pest houses where thousands were taken and died. Through the good grace of our landlord Mr Bartlemary and the good grace of Dr. Bealam ____ was kept quiet and and they both went through the worst ____ of this disease for more than 2 months.

We Three children lived with Uncle and Aunt Grenzig during that time in Suydam St. near Central Ave.

After Father and Mothers recovery We moved to Bushwick Ave. corner of Varet St 3 story Tenement on West Union this was first of 1872 and 73.

In May or June 1873 Father built our home at 25 Starr St and we moved into our New Home June 1873. I was then 10 years Old. I received my first years of education in the Public School # _______ McKibben st ______ Ewen st (now Manhattan Ave) and Graham Ave that was the furthest out school at that time. From Starr St I was sent to a wooden School Building on Bremen St near where Liebmann ______ now stands. Public school 24 _____ Place & Bushwick Ave was being built then and completed 1873 all children were then transferred from Bremen to the new school where I left school at 14 and went to work 84 Beckman St NYC for George Monrow Publisher.

My Father became a Citizen in due time, but I have not been able to trace what year his papers were made out. I have tried this Sep 28 through the Board of Elections in the Municipal Building to trace the history. The board has no books previous to 1875.

I have been advised to go to the Board of Elections Registration 12 Floor Municipal Building where I may discover more facts. I have seen in the first _______ a record of my Father & I voting from 25 Starr St 18 Ward 26 Election District 1891

Click on each page below to zoom into the image.
See if you can figure out the eligible words as marked ____ in the typed version above. 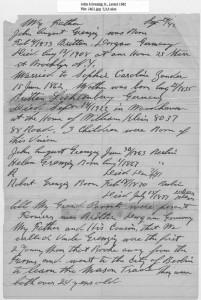 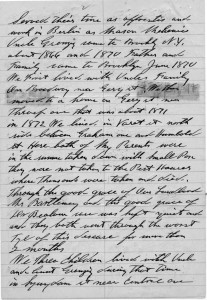 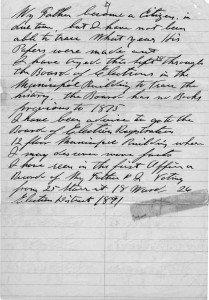